Hosted by the Red Deer Museum + Art Gallery and Carnival Cinemas, in partnership with Film Circuit, presented by TIFF. Directed by Gavin Hood, Rated 14A UK/USA | 112 minutes | English, Entertainment One About the Film: Official Secrets recalls the prosecution of real-life whistle-blower Katharine Gun (Keira Knightley, Colette, The Imitation Game), a story that might otherwise be a footnote in the campaign that led to the March 2003 invasion of Iraq by British and American troops. The film offers a behind-the-scenes account of events from the perspectives of Gun and the journalists and lawyers that warn of the perilous state of democracy at times of war. Gun was a young translator at the United Kingdom’s Government Communications Headquarters (GCHQ). George W. Bush, President of the United States, and Tony Blair, Prime Minister of the United Kingdom, were doing everything in their power to secure a United Nations resolution to sanction war. As part of that effort, the States’ National Security Agency sent a memo to GCHQ with an order to gather information on diplomats from certain nations so they could fix the UN vote and protect themselves from being charged with any unlawful acts. Gun is reluctant to follow the order, knowing that the case for war has yet to be proven. Weighed down by her conscience, she risks everything and leaks the memo in the hopes of stopping the war — but no one can stand in its way. Did Gun break the law? Did she violate the UK’s Official Secrets Act? Is she a traitor? These are the motivating questions from here on out. Directed by Gavin Hood (Tsotsi, winner of the 2006 Academy Award for Best Foreign Language Film) and stacked with a who’s who of British acting heavyweights, Official Secrets is an examination of the meaning, value, and act of loyalty. “A sturdy, entertaining political thriller that pushes all the right buttons and triggers all the right outraged reactions.” —Tim Grierson,Screen International Principal Cast: Keira Knightley, Matt Smith, Matthew Goode, Rhys Ifans Tickets are on sale now! Purchase your tickets online at www.reddeermuseum.com, stop by the Red Deer Museum + Art Gallery in person, or give us a call at 403.309.8405. Tickets are $8 each for valid MAG Members, and $10 each for Non-Members, up until 4:30 pm on film nights. Tickets can be purchased at the door on film night for $10 each starting at 6 pm (cash only; no member rate at the door), pending availability. Reel Movie Mondays gratefully acknowledges our partnership with Film Circuit, presented by TIFF, and its sponsors and supporters. For more information about Film Circuit and to view a full list of their sponsors and supporters, please visit www.tiff.net/filmcircuit. 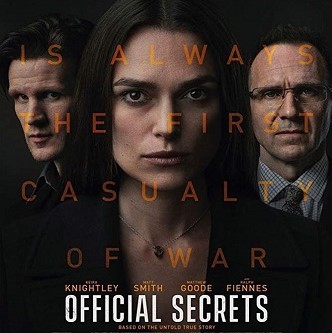