Ignition Theatre, celebrating fifteen years of theatrical excellence, is proud to launch its milestone season with a seminal production of the Pulitzer Prize and Tony Award winning play PROOF by David Auburn. Starring: Morgan Haley Smith, Christopher Schulz, Kate Adams and Paul Boultbee. Directed by Matt Grue. Performances begin October17th and run through October 26th (NO SHOWS MON & TUES). Curtain is 7:30PM nightly at the Red Deer Memorial Centre, Nickel Studio (Third Floor). Tickets are $20.00 / $25.00 (Friday and Saturday Performances) and available online at www.ignitiontheatre.ca and at the theatre box office 30 minutes prior to curtain. Patrons are also encouraged to visit Ignition Theatre online for further information about the play, upcoming productions and to purchase discounted season tickets. "AN EXHILARATING AND ASSURED NEW PLAY; ACCESSIBLE AND AS COMPELLING AS THE BEST SORT OF DETECTIVE STORY" - THE NEW YORK TIMES PROOF is the story of an enigmatic young woman, Catherine, her manipulative sister, their brilliant father, and an unexpected suitor. They are all pieces of the puzzle in the search for the truth behind a mysterious mathematical proof. A young, but guarded Catherine, grieves over the loss of her father, a famous mathematician, who had become somewhat of a legend at the local university for his ability to solve complicated proofs; and whose life and brilliant career came to premature end due to a lengthy and devastating battle with dementia. Just as Catherine begins to give in to her fear that she, too, might suffer from her father’s condition, her older sister Claire returns home to help “settle” family affairs; and Hal, one of the father’s old students, starts to poke around the house... What Hal discovers in an old speckle-bound notebook brings to light a buried family secret that tests the sisters’ kinship as well as the romantic feelings growing between Catherine and Hal; which is to say nothing of the far reaching consequences should the notebook become public. Equal parts gut wrenching drama and absorbing mystery with a healthy dose of biting humour thrown in for good measure; PROOF, in addition to its prestige and critical acclaim, will surely be recognized as one of the true classics of modern, contemporary theatre. "AUBURN HAS TAKEN ON SOME BIGGIES HERE; WHAT THE LINK MAY BE BETWEEN GENIUS AND MENTAL INSTABILITY, WHY IT IS THAT LIVES GET STUCK, AND HOW ELUSIVE THE TRUTH CAN BE...PROOF'S LEVEL OF ACCOMPLISHMENT AND THE REALNESS OF ITS CHARACTERS SHOW THAT AUBURN HAS BOTH DEPTH AND A VOICE" - THE NEW YORKER 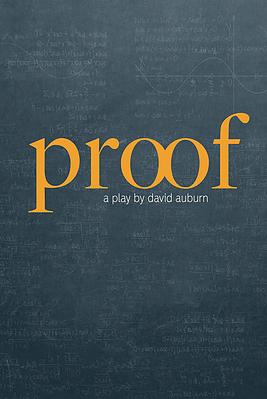